“Keeping some of these projects open, it puts us in a better position to get this economy going again once we come out of this thing.” – CEO Aaron West 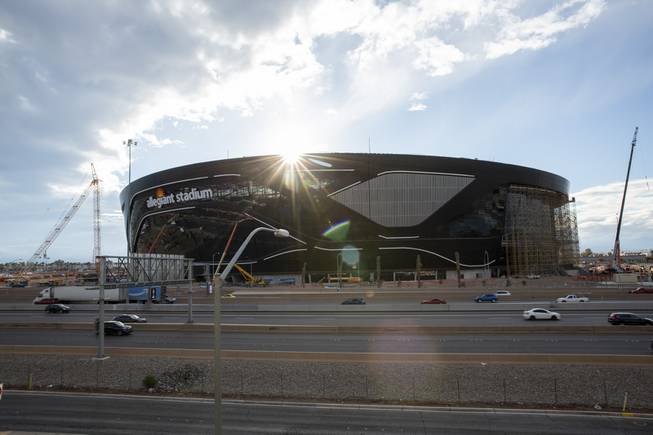 Covid-19 concerns have shut down most of Las Vegas. But at the construction site for the $2 billion Allegiant Stadium just off the Strip and Russell Road, it’s business as usual as the project nears its July 31 completion.

Don Webb, chief operating officer for Las Vegas Stadium Co., said it’s likely that only a government-imposed mandate to temporarily shutter the state’s construction industry — now classified as an essential business — would alter plans for the 65,000-seat domed stadium to be finished on schedule.

The stadium, which will house the Raiders and UNLV football, is about 85% complete, Webb said.

“There are no labor problems and no material supply-chain problems,” Webb said. “My biggest concern right now is government intervention. We’re able to manage the schedule, manage the budget, and manage labor resources and materials. What’s difficult now during such a squirrelly situation is the government.”

There is no indication that Nevada Gov. Steve Sisolak has any intention of changing direction on the construction industry, even as other U.S. states have put restrictions in place for the sector. Last week, Sisolak announced a furthering of a set of emergency social distancing guidelines that he put in last month, including the closing down of golf courses, in-person religious services, automotive showrooms at dealerships, and real estate showings and open houses.

But Sisolak stopped short of restricting the construction industry.

“I don’t want another 100,000 or more filing for unemployment if I can avoid it,” Sisolak said Wednesday during a press briefing. “I have a quarter-million people who have filed for unemployment. (Construction workers) have been practicing increased protocols, as issued by OSHA. Thus far, it seems to be OK, but we’re receiving it on a regular basis.”

With just over 2,000 workers at the 62-acre construction site each day, Webb said the fact that only two have tested positive for COVID-19 is a testament to how safety precautions have worked to date.

Webb said about 90% of the remaining work on the stadium can be done with workers being 6 feet from each other, which is the universal social distancing safety standard. Some tasks, though, will require workers to be closer than 6 feet.

“For instance, if a guy is hanging a 100-pound glass door, that’s a two-person job,” Webb said. “What we’ve been communicating with the governor and trying to work out with his Nevada OSHA people is, look, certain tasks are impractical or unsafe to do practicing a 6-foot separation. We’d like to default to the federal OSHA guidelines, which have been specifically placed because of COVID-19 and provide mitigation measures.”

Along with the Nevada OSHA office, a spokesperson for Sisolak did not immediately return a message left Monday afternoon.

“I know a lot of people think we’ve got government in our pocket because, look, they put $750 million into this project and the governor is an obvious cheerleader for this,” Webb said. “That’s just not the case. I’m doing some serious arm-wrestling with the Nevada OSHA people. Trying to thread the needle on this is my biggest challenge right now, frankly.”

A project somewhat similar in size, the $4.3 billion Resorts World Las Vegas complex going up on the Strip, is also progressing, though four workers there have tested positive for COVID-19 in recent weeks. The Las Vegas Convention and Visitors Authority has also said it plans to complete its convention center expansion project on schedule. That is expected to be done in January.

While safety is a big concern, Webb and Nevada Builders Alliance CEO Aaron West said construction sites are actually some of the cleanest, safest places for people who have to leave their homes.

“I’m certainly more afraid of going to Walmart than I am of going to a job site right now,” West said. “Our people are used to working with personal protective equipment. Most of the time, they’re wearing masks and shields and stuff anyway. I know there have been rumors of the Raiders stadium project shutting down, but the biggest issues I’m hearing about are at-home issues. Some people’s family members don’t want them to go anywhere, much less a job site.”

In response to coronavirus concerns, stadium builder Mortenson-McCarthy said all workers at the site are now being given a “verbal health screen” prior to their shift. Large group activities at the site were discontinued on March 16.

West said it’s likely that the two Allegiant Stadium laborers who contracted COVID-19 didn’t even get it from the job site.

“Keeping some of these projects open, it puts us in a better position to get this economy going again once we come out of this thing,” West said. “We’re not seeing it anecdotally or statistically that job sites are becoming breeding grounds for COVID-19. And, trust me, OSHA people are out at sites and they’re checking to see if people are doing what they’re supposed to be doing.”

As long as positive cases at the Allegiant Stadium site are so rare, Webb said he doesn’t understand how sending all those workers home for a time would help in the battle against COVID-19.

“From an infection standpoint, we’re having one positive worker per thousand,” Webb said. “We can send everyone home and shut the site down, but then 2,000 people won’t have a paycheck and we’re going to be late on the project. There are all kinds of problems that would stem from that and you’re then sending all those people out into the general population, which has the same infection rate as our job site. All kinds of societal problems could come from that. I think having the stadium project open is a good thing.”

While a report over the weekend suggested that the Raiders have been considering contingency plans to possibly play some 2020 pre- or regular season games outside of Las Vegas if the stadium isn’t completed on time, Webb said he’s laser-focused on completing on schedule.

The final pieces of the stadium’s fluorine-based plastic roof panels are expected to be placed later this week, which would make the facility completely enclosed, Webb said. UNLV hosts Cal at the stadium Aug. 29.

“If we don’t have that wild card of government shutting us down or making it impossible, yes, we’re going to finish on time,” Webb said. “Unless there’s a backup plan that I’m not familiar with, we’re all in on Las Vegas. We’ve got all our chips in on Las Vegas, so that should tell you how serious we’d take any interruption. I intend to finish this on time.”